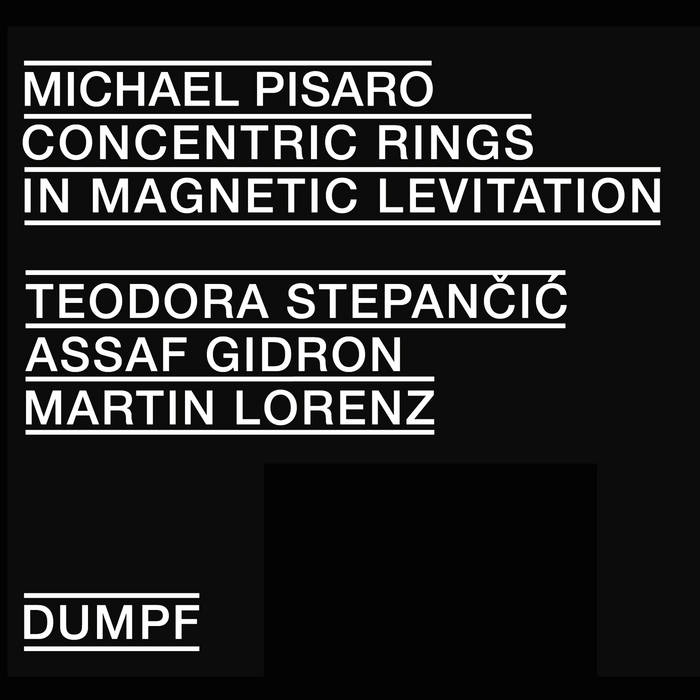 Concentric Rings in Magnetic Levitation is an hour long composition by Michael Pisaro, written for three musicians playing live and pre-recorded piano, percussion, sine waves, tape machines, various objects and found sounds, and comprised of fourteen interdependently moving layers of musical material. This multifaceted work creates a world within a world, a semblance of a naturally occurring environment within a performance space, in which both aesthetic and emotive sound qualities are elegantly balanced, glacially moving through time.

In Book XI of his Meditations, Marcus Aurelius enjoins us to “deconstruct the melodic line of a song into its individual notes and ask yourself of each of them: “Is this something that overpowers me?” (Trans. Martin Hammond) This meditation is remarkable for the radically modern mode of listening it asks us to adopt. In breaking down music into fragments—what Aurelius describes as “go[ing] straight to the component parts”—we might refresh habituated listening responses and achieve ethical self-awareness. Aurelius insists that we dismantle and “deconstruct” music—but what of art that already begins from discomposed parts of sound? Sound itself is difficult to sustain—“Everything eventually becomes melody” as Christian Wolff has observed. Yet, Aurelius argues, there is ethical value in breaking down sounds and asking what they do to us and to our community. Experimentalists—Wandelweiser composers in particular—have formalized such an ascetic musicality. From our encounters with discontinuity, we are invited to reconstruct an ephemeral world from the novel relationships produced through experimental action. It is this recording of Michael Pisaro’s Concentric Rings in Magnetic Levitation by Teodora Stepančić, Assaf Gidron, and Martin Lorenz that got me thinking along these lines. In his score, Pisaro describes the piece as a series of 13 “rings (or loops) of sound, wound around each other” and the performers’ realization dramatizes the weaving and unweaving of these bands. Listening to their gorgeous and melancholic results, I feel this process produces an evanescent intimacy that is lost as quickly as it establishes. The rings converge and pull apart again.
In the opening moments of the performance, my listening homes in on the fragile unisons that blur the boundaries between distinct rings. The early minutes of the piece present us a with the musicians’ attempted and achieved unisons between the piano part(s), crotales, and sine tones. Occasionally a sine tone emerges and sustains itself long enough to be fused with a high note from the “live” piano part. These unisons gather only short-lived momentum towards coalescence. The rapid decay of the high register in the piano though becomes a powerful oppositional force in itself; the suddenness of its loss points up the fragility of rings’ alignment. The extremes of experience, of intimacy with the sounds and the rapid loss of it, are almost too much to bear. As a sine tone fades in, I experience a sensory fullness as the tone floods my awareness—a warm psychoacoustic bath. The piano’s decay then produces a powerful sense of distancing, what Morton Feldman (in a different context) evocatively called a “departing landscape.” The upper register rings had merged and I had merged with them. The rings are soon forced apart by the brute fact of decay.
Ambiguous unisons are but one milestone on the path cleared by the piece. Other rings mark out a gradation between stasis and mechanized rhythm that is subsumed within the larger circulatory patterns enacted by other rings. Three times in the latter half of Concentric Rings, a “rhythmic cycle” produced by “a mechanical, ongoing, rhythmic clicking (as might be obtained from an amplified ticker tape)” emerges as the 11th ring. These clicks emerge from a continuous ground of white noise. In the regularity and brevity of their repetition, the rhythmic cycles are disconcerting because they are simply too apparent. They are too easy to focus on because of the rapid regularity of their looping. The circular processes happening on longer time scales seems to be shrunk down into something immediate and rather banal. Yet they do important work to define the broader play of temporalities occurring across the piece. As the unisons had emerged then faltered, these rhythmic cycles coalesce and break apart—moving from arrhythmic static to looped rhythmic cells to glacial processes over longer timespans unavailable to our perception. All of these cycles evince the winding and unwinding of Concentric Rings explicit in Pisaro’s musical language. His sounds invite listeners to handle the deconstructed sounds with kindness and affection but alert us to the tenuousness of any collectivity. At the end of Concentric Rings, I am left with the desire to reestablish what was ephemerally present in the work—the intimate bonds established between people through sound. This desire is the virtue of Pisaro’s meditation and its commands—Attend to the potential for communion that is always already around us. Take care of it once it has been established. Mourn it when it is lost.

Recorded by Willy Strehler at Studio 1, Radio Studio Zürich 2016
Edits and additional soundprocessing by Assaf Gidron
Mixed and mastered by Willy Strehler at Klangdach, Guntershausen 2018
A co-production with Radio SRF 2 Kultur
Produced by Martin Lorenz
This record was made possible through crowdfunding. We are grateful to everyone who supported us